Waking up to the hum of the snowmaking machines during the winter at Perisher is a welcome sign that there will be fresh snow on the ground from the seasons start to finish.

Perisher has invested heavily in snowmaking to ensure guests are provided with the best possible conditions all winter. Since 2007, Perisher has spent over $22 million on improving and expanding the resort's snowmaking system, including the installation of new automated, energy efficient snow-guns.

Techno Alpin has supplied the latest in automated snowmaking technology that is up to nine times more energy efficient than previous systems; improving snow reliability and quality. The new snow guns are controlled by computer software and have their air/water mix constantly adjusted to maximise efficiency under the prevailing climate conditions. The computer controlled automation also allows significantly quicker start-up and shut down than manual operations, further increasing efficiency.

Perisher typically conducts extensive work over the summer months to create terrain that requires less snow to produce a safe and acceptable cover of snow for skiing and boarding. Examples of this work include summer grooming of the slopes, such as the removal of rocks and the erection of snow fences to help build up snow that can then be spread across the resort to locations which need additional cover.

Perisher plans to increase snowmaking coverage to 110 hectares, aiming to have all the trails linking the four ski areas covered from the seasons start to finish. All new snowmaking at Perisher will be automated to ensure that all snowmaking opportunities are maximised and that the snowmaking operation is as efficient as it can be. Perisher also plans to automate its existing snowmaking over time. The result - skiers and boarders will be able to ski to and from each of the four areas all season long!

How does snowmaking work?

By definition, snow is ’crystallized ice particles having the physical integrity and the strength to maintain their shape’. Normally created by Mother Nature, but when Mother Nature does not deliver and snow is needed for ski resorts, that's when the snowmakers step in to ensure visitors to the resort are able to enjoy on-snow activities.

Natural snow forms when water vapour in a cloud formation condenses into a raindrop. Given cold atmospheric conditions the raindrop freezes and forms an ice crystal with six tiny arms (called dendrites). This is the classic snowflake. On the other hand, man-made snow forms a compact six-sided structure more like an ice cube.

How does snowmaking make snow?

Snowmaking requires a significant level of infrastructure including water storages, pump stations, compressors, pipes, electricity supply, hydrants and weather stations. Snowmaking machines (commonly referred to as ‘snowguns’), make snow by breaking water into small particles, cooling the water by causing the particles to move through cold air, nucleating (the creation of small ice crystals) the particles and distributing the resulting snow on the ground.

The efficiency of snowmaking is largely driven by weather conditions. Low temperature and low humidity increase snowmaking efficiency, so in Australia, snowmaking is practicable mainly during the early to middle part of the season (typically May to mid-August).

Efficiency of snowmaking is enhanced by snowmaking additives, which are added to the stream of water to promote the nucleation of the snow. Scientific research both here and overseas shows the additives cause no environmental concern. The National Parks and Wildlife authorise additive use.

What is required for snowmaking?

Perisher has two plant rooms, one at Perisher’s Front Valley and one at the base of the Terminal Quad Chair at Blue Cow.

Front Valley has two large centrifugal compressors supplying a total of 20340m3 of compressed air per hour. During the compression process a substantial amount of heat is produced and this hot compressed air is then cooled to a usable temperature by piping it through a cooling tower. From the cooling tower the air then passes through air dryers. The dryers remove moisture by passing air through cylinders containing desiccant pellets that separate the moisture from the air. This moisture is then drained off.

Water is supplied from a pump station at North Perisher that fills a storage tank adjacent to the Front Valley plant room as well as a feed line from Pump Station 1 at Blue Cow. Both air and water are then fed into the dual underground reticulation system onto Front Valley, Goat’s Gully, Yabby Flat, Snowy Trails, Happy Valley T-bar, and Towers runs.

Water for Blue Cow is pumped from a Snowy Hydro aqueduct near the bottom of the Ridge Chair. Both air and water is then fed into the dual underground reticulation system onto the Early Starter, Rope Tows, Zali’s, Exelerator and Roller Coaster runs.

Smiggin Holes uses fan guns. A submersible pump in a submerged tank pumps water for use by the snow guns.

Manual air-water guns use a jet of compressed air from a central compressor to break up a stream of water into fine particles and propel these into the atmosphere under conditions which causes them to freeze as particles of snow. A snowmaker adjusts the amount of water to the snowgun to obtain the optimum snow quality.

Fan guns achieve a similar effect by passing a stream of water into an airflow produced by a fan; similarly water is adjusted to obtain the optimum snow quality.

While fans are slightly more energy-efficient than air-water guns, they produce snow in a broad dispersed band that’s difficult to direct, especially in windy conditions.

Air-water guns produce a more concentrated stream of snow, which can be more effectively directed along confined trails or accumulated in a large pile for distribution by grooming machines.

Both types of snow guns can be mounted on a tower to increase the amount of ‘hang time’ the water droplets are in the air, which increases the amount of snow that can be produced.

The new automated snowguns come in two types; Lances and Fans. Lances are similar to an air/water snowgun but are mounted on either a 6m or 9m tower and use 9 times less compressed air. Each gun is controlled by a computer system that constantly checks local weather information and adjusts the snowgun to produce the optimum snow quality. Automation also allows the snowmaking department to start and stop the snowguns quickly to take advantage of, sometimes, short snowmaking windows.

The snowmaker determines snow quality. Snowmakers will make either wet, medium or dry snow depending on the condition of the ski slope and weather conditions. Adjustments of the snow guns, which are made every half to one hour throughout the night, allow optimum snow production for the prevailing weather conditions, including temperature, humidity, wind speed and direction.

Automation allows us to set the snow quality required from a snowgun, and the computer adjusts the snowgun constantly as the weather changes during the night.

In making snow, the general objective is to make it wetter and denser than fresh, natural snow. Snowmakers try to make snow similar to three-day-old natural snow because it lasts longer, wears traffic better, resists wind scour, grooms more easily and is more energy-efficient to make. Wetter snow is more efficient than dry snow because more can be made with the same amount of equipment, the same energy and the same staff.

Medium snow is made when a run has adequate snow depth. Fresh, medium quality snow is easier to ski on than wetter snow. If snowmaking continues after slope grooming has taken place, medium snow quality is made so as not to destroy the groomed surface.

Dry snow is generally made just before the snowmaking operation finishes and leaves a lighter, powdery cover on the ski slope that we all love to ski and board on! 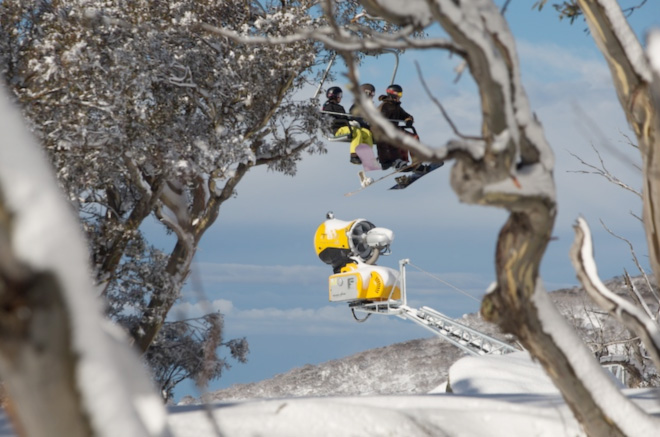